The Blessing Of Our Temple 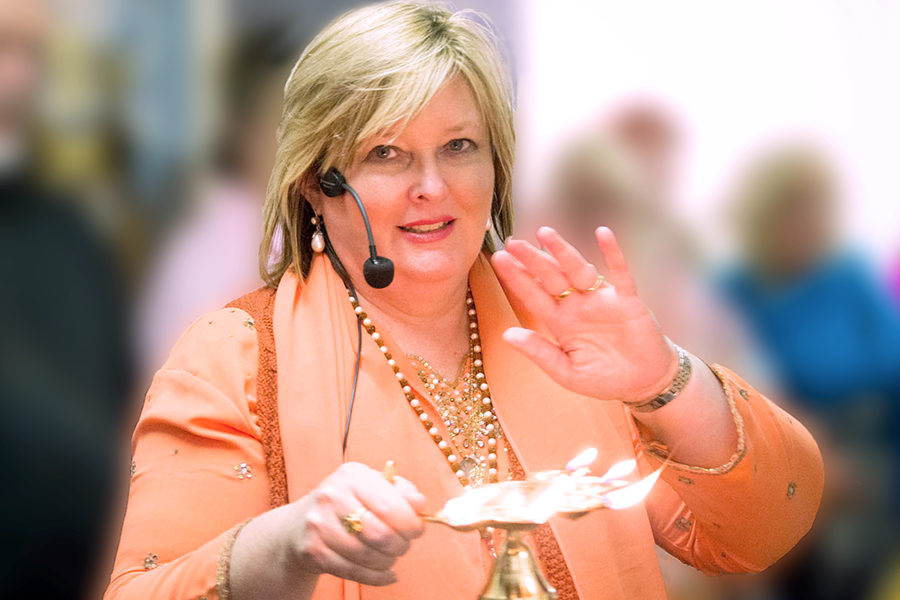 Namaste, I am writing to share with you some memories of the beautiful night we have just concluded, blessing our temple at Cooranbong.

Amma was re-consecrating the temple at Peedam, in alignment with the Vedic practice of re-dedicating, renovating and blessing temples every 12 years. So, we decided to ask Amma if we could join into that celebration and bring the sublime energy that is Amma Narayani to the Abode of Peace temple in Cooranbong. As preparation, we have been renovating, painting, beautifying and putting lots of love into the temple for nearly 12 months.

We began with Sarva Mangalam chant for about 15 minutes, then a mala of Om Namo Narayani and then Ghomata Putra flower puja. Everyone was invited to come and place flowers in a devotional way onto our beautiful Ghomata statue as we recited some beautiful prayers. The energy started flooding in.

When that concluded, we blessed everyone. Then, we went on a guided shamanic journey to Peedam to visit our beloved Divine mother. This was something like what we do at Wesak. We all joined together, forming a geometric shape and lifted out of our bodies through the roof of the temple, and journeyed to India via Uluru and Kata Tjuta.  We circumambulated Kata Tjuta and paid our respects to the temple of light that is Uluru. Then we headed North West, and flew over the Indian Ocean and into Southern India.

When we arrived in Malakodi, we perceived the crowds gathered around the temple, and the staircase upwards to the roof, where we perceived Amma performing Abhishekam to the building. We arose in our light bodies to stand around the building watching Amma as she offered many different foods and offerings. We saw thousands of other light beings gathered there, as well as the very large gathering of devotees and priests.

On the way back, we walked the star path together, then sat in the golden Lakshmi temple where we received blessings from the Devi. Each of us received an energetic gift of a golden conical headdress upon our crown chakras. This stayed with us as we then alighted and began to flow back home.

We returned via Uluru and Kata Tjuta, bringing the sublime energy of bliss and love with us from the temples. We again circumambulated Kata Tjuta, which blazed an incandescent sky blue colour. We paid our respects to the wise ones and the ancestors there. We then landed then atop Uluru and sat in a circle with all of the golden conical head dresses infusing energy of grace into the library of light that is Uluru.

When we came back to the temple in Cooranbong we returned to the roof. When we paused on the roof and again sat in a circle with the golden conical head dresses placed before us, we felt tremendous blessings pouring down. Then, right at that point in the meditation, in the physical plane, it started to rain. Rain is called Lakshmi in some parts of India and is associated with abundance and Divine blessings. The rain continued for about 3 minutes, in fact, for as long as it took us to receive the blessings. As we came back into our bodies and back into normal consciousness, the rain stopped.

We were all pretty expanded so it took a few minutes to be able to talk. We had a sharing and many people found the experience very moving and most people were in bliss.  We then formed a procession and with chanting, bells, sacred flames and flowers, we went and paid our respects at each and every altar in the building.  We finished with flowers and chants for Durga, and we drank blessed Holy water.

The building was zinging with energy and we all could feel the difference. We look forward to maintaining the sublime energy that was gifted to us, and once more we express our deep gratitude for the sacredness that has been revealed to us and the simple yet profoundly grace-filled practices, that we now do every day at the Abode of Peace.

You are warmly invited to come and visit, see the new inspirational signs which now decorate our drive way, and the newly renovated Saraswati class room/temple. Big thank you to everyone who helped us with the work, and may you all be richly blessed.

Our Temple is now located at 213 Martinsville Road, Cooranbong and will re-open after covid.

← Prev: Spirituality In India Your Destiny? It's Under Your Feet →