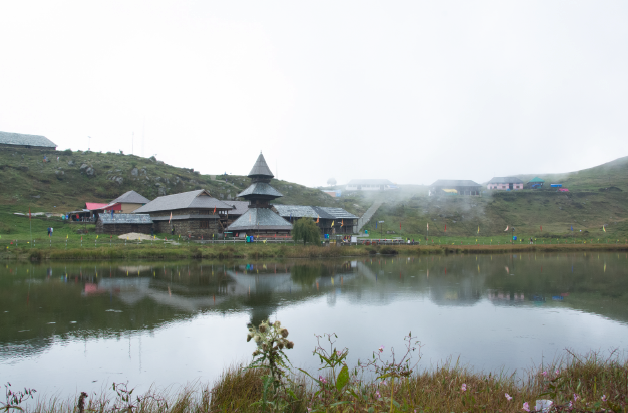 The next day we set off on the first long leg of our yatra. We drove for about 7 hours with various scenic stops, and banquets, and traversed a lot of stunning country, climbing way up into the Himalayan Mountains.

Eventually we came to our destination, Lake Prashar. This lake was about 9,500 feet above sea level, and was where an ancient Rishi called Prashar lived.  He was born from the lineage of Brahman saints said to have been descended from Lord Brahma and included Vashista, who initiated the King into becoming a Brahma Rishi in the story of the Gayatri mantra. His family descendants also includes Vyasa, who wrote the Mahabrata and other classics of Indian scriptures.  Prassar himself composed a number of poems that are recorded within the Vedas.

Wherever truly enlightened people live, there is an energy that pervades the place, and this energy is often very long lasting, continuing to imbue a place for centuries if it is not overly disturbed. Until recently there was no road going up to the lake, and so it was only committed pilgrims who went there on foot, and as not many people knew where exactly the lake was, it was rarely visited.  A temple was constructed at the site centuries ago, and local priests have done puja every day to maintain the energy of the site, which was amazing.

One of the most extraordinary features of this lake is that it contains a floating island that looks perfectly round. It moves around the lake, and is said to be synchronized with the turning of the earth around the sun. In various photos that have been taken of the lake, the island is in a variety of different positions. It is not affected by the wind, but has its own means of stability. The lake is exceptionally deep, and there is definitely something of a mystical quality about even the physical dimensions of that lake! Legend has it that Bhema, brother of Arjuna who was the star of the Bhagavad Gita. Formed the lake by banging his elbow down into the ground so that the sage Prassar had drinking water. Of course this is a multidimensional story and has deep significance beyond the physical world.

Even though the site was remote and difficult to access along a perilous one lane, often dirt road, when we got to our campsite, there were a series of large marquis, one for dining and one for entertainment as well as various other services.

We were again entertained by a different Indian classical music group, all devotees of Swamiji, and at dinner a banquet was served.  Many were up and out of their tents at dawn the next morning to take in the sunrise over the lake and the mountains. Snowy Himalayan peaks were visible in the background, piercing the sky and reminding us that winter was coming to this region.

The physical beauty of the lake and its surrounding hills, set atop huge mountains above the clouds took our breath away. What was even more breathtaking was the spiritual energy. We knew we were in a place that was special, accompanied by a sage who can open the energy of the place for and with us. We were all about to receive big blessings. Everyone loved it. We then meditated silently, again circumambulated the lake, received blessings and then we began our long journey to our hotel in the beautiful city of Manali, and the next adventure.

← Prev: Journey With The Infinite, Yatra The Holy Lake To Manali →