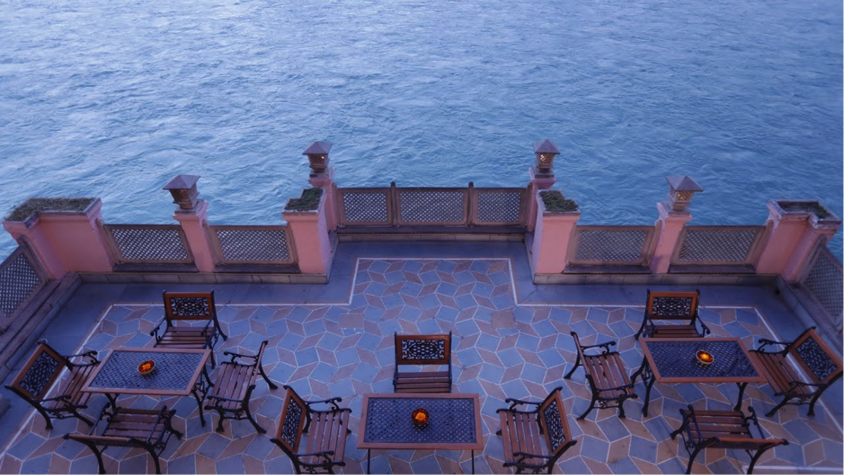 Many years ago I received guidance to visit this temple, and upon arrival all the bells and drums began to ring, and the sound propelled me into connection with the spiritual temple, not of this world. It felt like I was dropped into the earth, where teachings were received along with lots of energy. It felt like something that in this life was one of those things that had to happen. You may have seen a photograph of me wrapped in an orange blanket, which was in our temples and ashrams for years. That photo was taken at Maya Devi temple after a huge awakening that took place here. This photo (left) is of the inner sanctum of the temple celebrating harvest time. There is no separation between nature and Divine energy in the Hindu spiritual traditions.

On this journey, we arrived at Maya Devi at 8 in the morning, after the main ceremonies were finished, and fewer people were about.  As soon as we entered the temple, Mother Durga animated within my being and I perceived a giant gush of golden energy coming up from the ground, through the temple and through us, and particularly through Gayatri, who had a very large activation.

After a blessing she almost levitated, her body rose up on the tips of her toes, arms in the air in total bliss, pulled upwards by the high voltage spiritual energy. Without ballet training standing on your toes like that is pretty hard to do! Some local devotees who were watching came and hugged her while I was elsewhere in the temple.  Gayatri felt the energy going to the people who were taking selfies and hugging her, and felt that the blessing had dissipated from her body.  Then, the Divine Mother showed her Purnam, that nothing was wrong and nothing had been taken, and that she could not be diminished by the energy having flowed to others, all she had to do was expand her energy through all that and expand into more self. This she did! The Devi gave a discourse about Poornam, which means the perfection and fullness of all things.

There is a famous Sanskrit mantra about Poornam:

Contemplate that for a while and see how you go;
Or, you could just chant: Om!

Everyone received blessings then we returned to the hotel, which has its own private ghat. A ghat is a set of concrete steps leading down into the Ganga river. We spent a very pleasant time with our feet in the river, singing to the Celestial Ganga, accompanied by Vidya playing guitar and Jyotishakti singing.

Lots of love from Haridwar.