Interfaith Celebration of the Divine We Ho’opono Pono’d everything, and then received blessings. There were lots of tears and hearts opening. Anandanetti, Ananda Maya, Lakshmi Ananda and I served Holy Communion alongside the Priests, while the Peace Angels lit up the room with their beauty and presence. It was lovely and possibly ground breaking; I am not sure how many Gurus and disciples of Hindu Avatars generally serve communion in a Christian mass! We were all very moved by it, as were many in the congregation.

After communion we went to a presentation of 3 eminent people from Islamic, Judaic and Christian faiths. It was called “Kill them, do not spare them and cast them into everlasting fire.” Not your average title for a presentation, and it was deliberately provocative. Nearly 2,000 people attended, seeking answers to how to deal with extremism and radical hate and violence in our world. The speakers dealt with their interpretations of some of the most violent and misused sections of the Holy Scriptures from their faiths.

We will share more about that at the Initiates retreat, which is coming up soon. The most telling point was their jointly expressed view that no acts of violence are actually caused by reading a scriptural text. Secondly, that every faith is a living tradition, interpreted by the leaders of the day in a manner that is consistent with the times in which they live, and the best understanding of compassionate right action that they are capable of. Every generation is equidistant from the Divine they said: what we can see in hindsight does not make us superior to people from the past, who were living with a different cultural reality.

What causes violence and war is political and economic power games, bigotry, racism, sexism, fear or hatred. Sometimes people distort scriptures to incorrectly justify their wrongful actions. All three speakers said that if every person practiced the essence of their religion – which is to love all and serve all – with compassion, then there would not actually be any war; the hatred and bigotry would end.

At one stage the female Jewish Rabbi asked all women to stand up if they had ever been the subject of sexual assault or domestic violence. I was shocked at how many people stood, over one in three women in the room. That’s 660 odd people just in that space! How distressing!

I really think we need to try and do something about that, and ideas have been whirling around in my head all day since. At a meeting with the Peace Angels this afternoon we discussed how helping other people deal with their sorrow and hardship, alleviating their suffering shrinks our own problems. It also helps to restore hope, which can lead people back to lasting and deep inner joy. I hope that we can make a contribution to assist with this serious social issue, and look forward to exploring this more when I get home.

This evening the Peace Angels walked through the entire Parliament building and circumambulated the massive Plenary room prior to a panel discussion on hate crimes.

Thousands of photos were taken, and many people cried when they saw the light and felt the energy of the group, who were in really good form. The energy was electric, and other helpers who were giving out our bookmarks and flyers about Shanti Mission and Peace Angels ran out of stock because so many people wanted to know more about who they were and what they were doing. I was so proud of them all!! 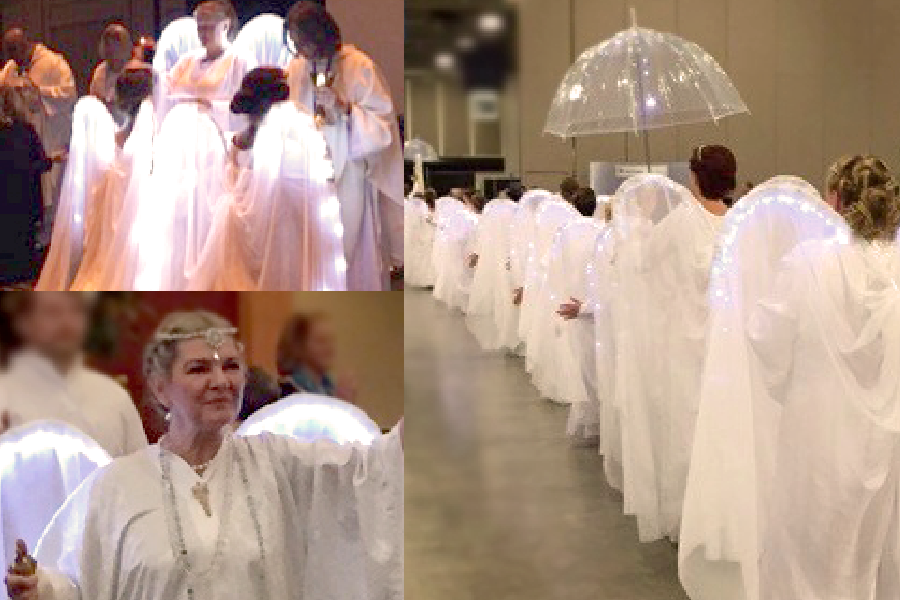 I am sure you will be too, and I hope you enjoy the beautiful photos taken here by Jaia Kali. (we miss you Hanumani!).