An Interview with Sri Sakthi Amma 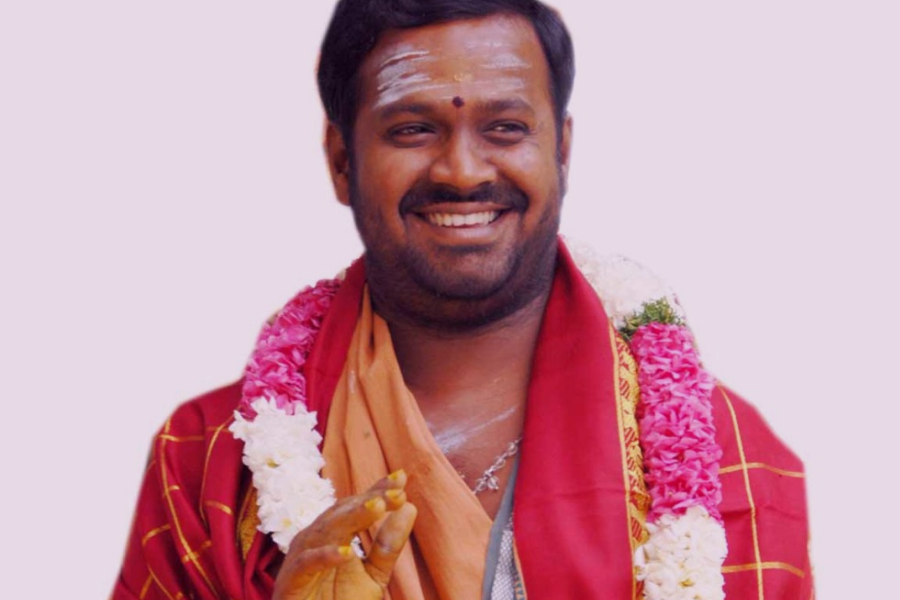 Below is an article that recently appeared in The Times of India, which is the largest newspaper in the world. The article carried photos of Maitreya playing the guitar, as well as Parvati Sundari, Bhadra Kali and Jagatambe meditating. Towards the end there is some discussion of climate change and what to do. I hope you enjoy reading the article.  Shakti Durga.

“At 39, SRI SAKTHI AMMA’s following includes Devi lovers, green activists, animal rights activists and educationists. He tells NARAYANI GANESH that the Golden Temple project is “to attract visitors, who experience wisdom and compassion once they get here”.

At Sripuram in Vellore, Tamil Nadu, the 1,500-kg gold-plated Golden Temple shimmers in the morning sun, its reflection in the waters glistening like golden confetti. The star-shaped pathway to the temple is lined with signposts displaying pearls of wisdom. People are queuing up to perform abhishekam to a 75-kg solid gold Lakshmi idol placed outside the sanctum. This is Sakthi Amma’s way of democratising the hitherto priestly ritual. Anyone is free to touch the idol and perform puja, without fear of sanction or ridicule. Interestingly, Sakthi Amma continues to perform daily puja to the old svayambhu rock idol, a little away from the Golden Temple, stunning in its anonymous simplicity.

I turn my attention to a large group of foreigners reciting the Mahalakshmi Ashtakam, Sri Suktam, and other shlokas to the strains of a guitar. They are seekers from Canada, Australia and the US and I spot the radiant Shakti Durga, the Australian spiritual guru, a follower of Sakthi Amma who leads the group. They find not just succour in Amma’s soothing discourses, but also love the natural ambience of the goshala, cow sanctuary, the organically grown flora and the eclectic approach to all things spiritual.

The goshala is spotlessly clean with some 1,000 cows and bulls. There are no flies or mosquitos — every section has ceiling fans that seem to run round the clock. No wonder the bovines here look so comfortable and relaxed! As nothing produced here is used commercially, all the milk got from the cows — once their calves have had their fill — are used in the Narayani Peedam’s kitchen, for puja rituals and the rest is distributed to students of their schools and balwadi. Poor households are gifted with a cow and calf after Go-puja that is performed daily by Sakthi Amma himself.

Why would a male guru take for himself the name of a female goddess? The story is that as a lad of 16, going to school in a bus, he had a eureka moment when he had a vision of Lakshmi Narayani, symbolising the cosmic energy embodying the power of Durga, Saraswati and Lakshmi all rolled into one — and from that moment on, seekers began to see him that way. “Gender is something we assign to the human body. But the Atman, Consciousness, is you — that comes from Paramatman, Absolute Consciousness, Brahmn, which is without form and so is genderless. What we think, we become,” says Sakthi Amma aka Narayani Amma.
Ask him if religious leaders ought to get into politics, and he says that while there should be no politics in spirituality, you can have spirituality in politics. “Even rajas of yore, despite all their power and stable of expert advisors, would seek the opinion of spiritual masters to take informed decisions for common benefit.”

Take the common man, say, in a remote village, who might be uneducated or even illiterate. He might not have had the opportunity to seek advice from scholars or saints. Yet, he might be inspired from within, possibly due to past good karma — blessed with inner guidance! So you can be your own guru, without ever having interacted with an external, physical guru in the conventional sense, says Sakthi Amma.

When Indic spiritual tradition is broad enough with room for all persuasions and perspectives, why the controversy over conversion, reconversion and ghar wapasi campaigns, he wonders. “When you say ‘religion,’ it means spiritual guidelines to living life in an orderly fashion without treading on another’s toes. If the guide to good living did not exist, there would be chaos. The Hindu way of life seeks always the common good; it is never directed at individual benefit. So why convert from this to another religion when you have all the guidelines you require right here? What is lacking here that you need to seek it elsewhere?” he wonders.

“What about economic inequities and discriminatory caste practices that deny dignity to a large number of people though they belong to the same ancient faith?” Sakthi Amma replies, “No Hindu is discriminated against here in Sripuram; anyone from anywhere of any faith is free to perform puja to Swarnalakshmi, as you can see. You have just eaten lunch at our dining hall where 5,000 visitors are served the same food from the same kitchen every day! You have seen our state-of-the-art schools where children aren’t discriminated against. Our modern Narayani Hospital serves anyone who needs medical attention. More people need to be aware of all the good instead of focusing only on those who go off track.” If discrimination exists in the Hindu fold, it isn’t the fault of the faith but of those misinterpreting it, he says.

“Who is more important, the priest or God?” asks the master who also explains that if Puri Jagannath Temple refuses admittance to foreigners, it is because they are not moving with the times. “Earlier, it was feared that insensitive tourists would ‘pollute’ the devotional ambience of the temple precincts. But now we know that it is not just curious tourists who wish to come here but a sizeable number of sincere seekers and devotees!” Says Shakti Durga, a frequent visitor, “You cannot have devotion without service, and service without devotion is sterile: the activities at Narayani Peedam combine all these things.”

The Green Shakti campaign focuses on afforestation and environment-friendly practices. What are Sakthi Amma’s views on climate change? “Let scientists and sceptics argue about global warming — that should not prevent us as individuals from doing what we can to conserve nature and help sustain a green environment that will enhance quality of life for everyone! Planting trees or saving water does not require you to believe in a particular faith or science study!” The dharma list includes giving water to cows and other animals, placing stones for animals to scratch themselves, erecting platforms for weary travellers to rest, create health services, feed the hungry, plant trees for shade and keeping your surroundings clean. “These are so basic,” he points out.”

← Prev: Climbing the Mountains of Consciousness The Weather, what can you Do? →