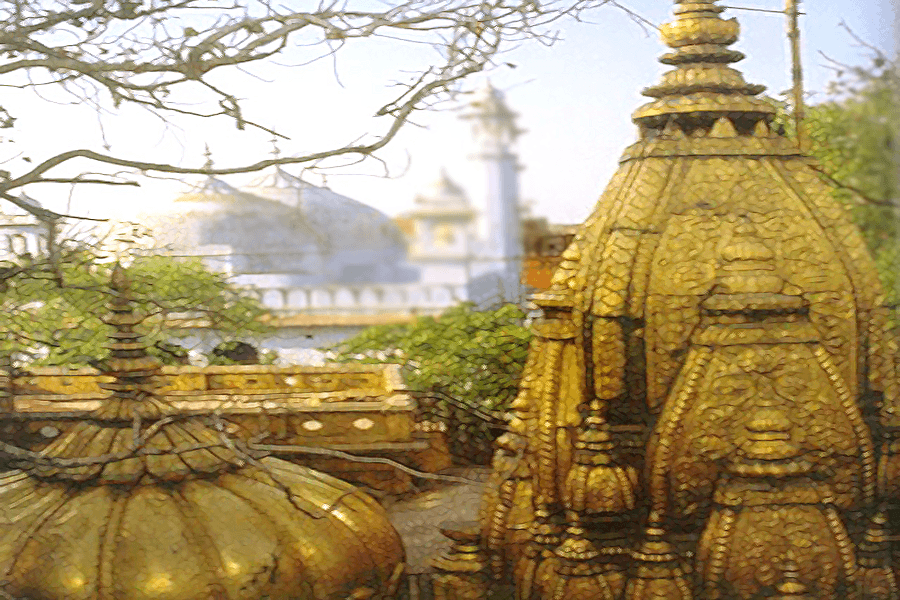 Explore the Kashi Vishvenath Temple in Varanasi on the banks of the sacred river Ganga.

Our visit to Varanasi really began prior to the large group arriving, when our staff all went to visit the Kashi Vishvenath temple. This is the golden temple where a jyotish lingham manifested long ago. These are light linghams: and history has it that man does not build them, they simply appear. There are 12 of these Jyotish linghams in India.

When we got to the temple it transpired that we needed passports to get in, and there is a lot of security. Shiva Kata Tjuta and Ganga did not have theirs, so they meditated outside the temple instead. The rest of us went in, and the spiritual energy was very strong. Immediately I noticed that the lingham itself is just part of the story. Underneath the temple and pervading the surrounding area was a huge light lingham, of a non-physical construction. It is a tremendous vortex of energy and truly does seem to be the basis of the story of Lord Shiva appearing as a pillar of light without beginning and without end.

Our meditation in the temple was shorter than we would have liked, on account of the vast number of people who wish to see the lingham. After a few minutes we had to leave, but we were able to tune into the lingham later. Shiva Kata Tjuta meanwhile had a similar experience in meditation, and was very moved by the experience. A few days later, Ganga, Shiva and I returned to the temple together and had another ‘dose’ of the jyotilingham. My feeling is that visiting the physical manifestation of the lingham opens more of the light lingham and that the physical darshan (sight) of the temple is part of the process.

Our program has been filled with blessings, music, discourses, the bonding of the group, and the energy of this tirtha (holy place, a bridge to the infinite). The theme has been how to have humility. We have had discourse after discourse about the pitfalls of arrogance, and how arrogance is really rooted in poor self esteem. If we feel worthy, we don’t need to try and impress others!

We have sliced and diced arrogance, found our own growing edges and the triggers that each of us have that can tumble us into arrogance. Perhaps as a spiritual exercise, riding the energy of our retreat, you could have a look within and observe your own triggers and times when perhaps you are not as humble as you could be? We all have them. Finding them and dealing with them will change your spiritual future.

At the end of the day, the further we progress, the narrower the path becomes. Arrogance in any form will be our downfall when we stand before the Holy of Holies eventually. If there was any quality that we need to really work on it is humility. It is the first and foremost hallmark of spiritual attainment.

I wish you all success in your spiritual path. In small things be great, and in great things, be humble.

← Prev: The Peace Angels In Ireland What Comes Next? →