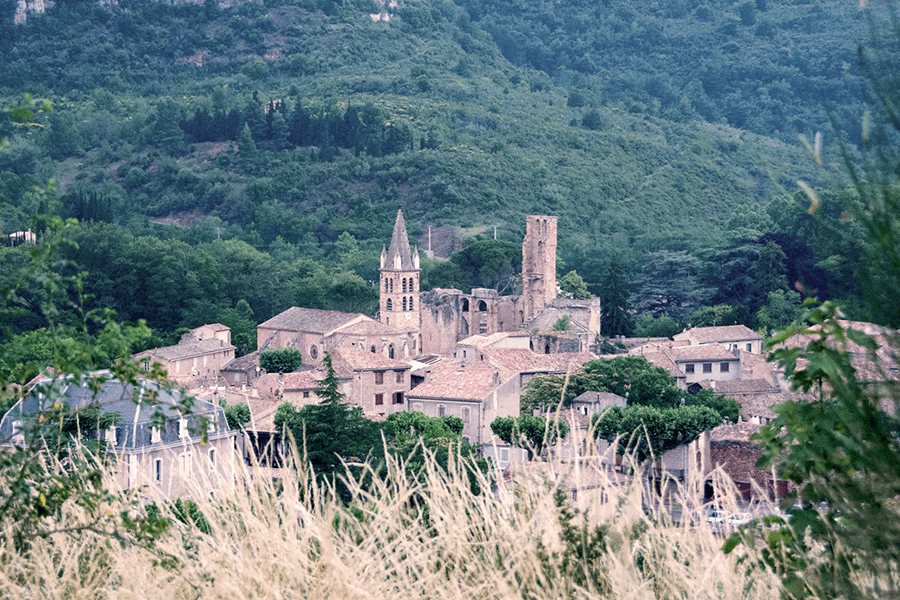 We are staying in a small medieval French village called Alet Les Bain in Occitania, which is famous for a few things, including some impressive 6th century Abbey ruins, the ‘new’ church which was built in the 1400’s, the thermal springs and Nostradamus, who lived here for most of his life. It is a town of beauty, history and gardens, set in the rolling foothills of the Pyrenees mountains, which border France and Spain.

There are a few major tourist attractions near here, the biggest being Carcassonne, a medieval city, which we visited on our first outing, which was great fun. Also Rennes Le Chateau, a small village on a hilltop which was featured in the DaVinci Code book.  Here there is a small church dedicated to Mary Magdalene, and a whole series of artworks, statues and symbols built by a priest in the early 20th century, who had found some kind of ‘treasure’ beneath the altar. He has left clues to a different version of history to what is the mainstream dogma of Christianity. It is postulated by some that He found some ancient manuscripts, which he was able to sell for a huge fortune and then renovate the church as we now see it.

We have also visited a stunning gorge in which is a cave chapel dedicated to Mary Magdalene and where She is supposed to have taught during Her time in the South of France.

It is great to absorb the stories and see the sights to orient ourselves in a new landscape. But for me the real reason to be here is to listen to nature, to tune into the land itself, which can teach us exquisitely, provided we are prepared to listen and tune in.

And the land here in Occitania is very talkative.  Pilgrims have been coming to this beautiful natural wonderland for millennia. It has attracted settlers from all over Europe and the Middle East and has absorbed the spiritual traditions of peoples from far and wide.  The voice of the Earth and the energy of the earth is really strong, and one can understand why it has attracted such a rich cross vesting of spiritual traditions. A lot of carnage also happened in these parts, such as the slaughter of the Cathars by the Roman Catholics, the ending of the Knights Templar who had headquarters in these parts, and the ruthless suppression of natural religions and anything that deviated from the doctrines of the Roman Church.

One of the means of suppression of other faiths was to destroy old temples and to build a church on the very same location. These are generally built on ley lines and places of spiritual power.  We visited an exquisite and alive Holy place in the tiny church of St Salvayre, (meaning Saviour) about 6 kilometers up in the hills from Alet Les Bains.  Unlike most churches which are built in the shape of a crucifix, this one is an equal armed cross, and inside the church is a standing stone as well as a solid stone altar such as was used by people of the old faiths. There is a suggestion it may have been a Roman temple dedicated to Mother Isis, and a way-station for travellers, before being converted into a chapel, but of course, no one can be sure.  It had wonderful energy.

We spent a good hour doing service in the church, cleaning it, throwing out dead flowers and decorating the altar with fresh flowers and the images of the Holy Mother. You could feel it saying thank you!  We then had an archangelic meditation with a few twists, opening the energy to the Christ then the Divine Mother, who poured in and the entire experience became ecstatic, as each person in turn was assisted to feel the vast blessing of the Divine Mother pouring down in a specific spot in the Church, before laying their hands on the old holy stones, while everyone else chanted with the harp (Veena Vaani) and guitar (Ineke) truly a memorable and special sacred time. And then, as if to tell us She had heard us, there was a big clap of thunder out of a previously blue sky, and it poured with rain!

Water seems to be a key to the spirituality of England and Europe, so far as pre-Christian nature based faiths are concerned.  You may recall from our last letter, the experience that some of us had in Wells England, where golden streams of energy came up out of the Earth like geysers. After writing about that, I ‘found’ a book on Sophia, which contained a story about maidens of the wells and I knew this was the spiritual reality I had experienced in Wells.

The story from the Holy Grail chronicles is from a book called Le Elucidation, which is one of the stories of the Ladies of the Lake.  Also known as maidens of the Wells and/or the Sybills, these maidens who lived in the earth would arise with a golden cup to give drink and sustenance to travelers or pilgrims. They were highly revered, and when they were in residence and respected by humanity, the land flourished and was verdantly harmonious.  However one day a King came by and raped the maiden, then his men followed suit, they took the cups and made off with them as well as the maidens. The land fell into chaotic disorder and became a wasteland.

This is really talking about us respecting the land and its sacredness, and when we do so as people of high vibration and devotion, the sacred energy of the Earth flowers and flourishes. When the respect and devotion is missing, when power politics takes the place of ethics, the sacred energy goes quiescent, retracted you could say, and the land does not thrive and nor do the people. The weather goes crazy and nature becomes cruel. The barbarism of the consciousness of the people is mirrored by a disastrous natural situation. There is much here for conservationists and environmentalists to take note of: it is possibly only with the cultivation of our spirituality in union with nature, that the natural world will harmonize and powerfully awaken into balance.

On with the story… the knights of the round table heard about this terrible tale of the rape of the maidens of the wells, and decided to avenge them.  They set off in search of the bandits, determined to exterminate them and all their kin.  En route they came across a band of wandering peoples, who told them that they were the descendants of the very same evil king and grail maidens.  The knights conferred, and decided that they could not exterminate them, because to do so would be to exterminate the children of the sacred grail maidens. They realized that one had to work with the admixed nature of the group and lead them from confusion and feeling lost, wandering the Earth forever, and to help them on their search. This they did. I feel we need a weekend to unpack the esoteric meaning of this story and apply it in our lives, yippie!

Water continued to be a theme when we came to Alet Les Bains. It so happens that it is situated on one of the biggest reserves of underground water in Europe.  Mineral water has been bottled here for hundreds of years. In our meditations, the very same gushing energies of golden light coming out of the earth are happening here as they did in Wells, and it feels like the adventures have not stopped. The old abbey was once a temple to Diana, and there is a bronze statue of Diana in the town square. The energy of the Divine mother as Diana, Isis, Demeter, Sybille and more is pouring up and through us, and much more will be shared with you in the future about our exquisite adventures.

If you would like to view more images of our journey you can go to www.shantiphotos.com and click on Shanti Mission photos 2017 and the various folders are there for you to enjoy. A big thank you to Hanumani for this amazing stock of images.

If you want to join Shakti Durga on a spiritual adventure, click here to see where she is going next.

← Prev: Merging with the Divine through Love Oh My Goddess Album Launch →