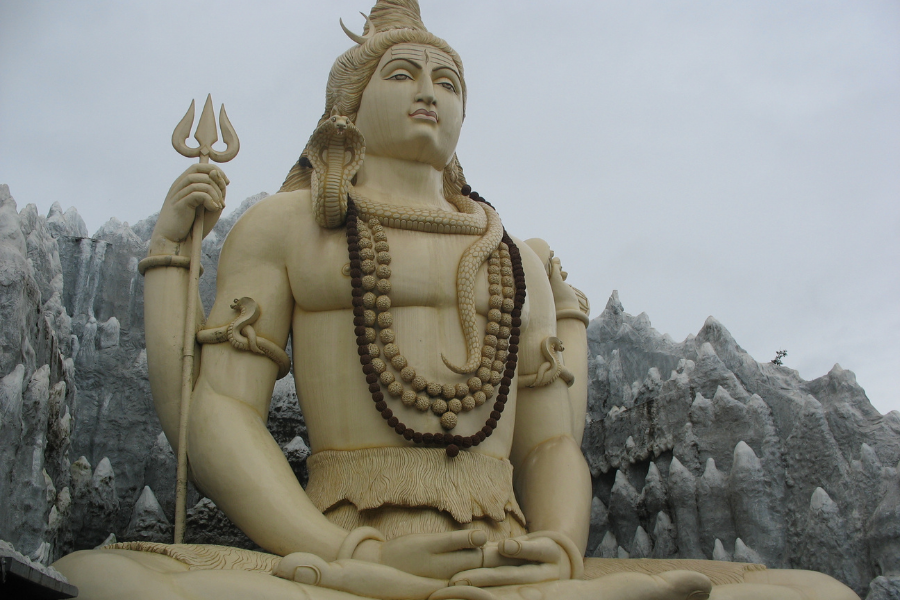 It came time to leave the haven of the Havali Hara Ganga hotel, and sweet memories of the Ganga listening to Vidya and Jyotishakti sing.  We were onto our next adventure, with a one hour journey up the river side road through a tiger and elephant reserve, to the city of Rishikesh.

Situated in a valley at the beginning of the Himalayan foothills, Rishikesh is an ancient temple town, and the capital of yoga in India. There are more ashrams, yoga studios, yoga clothes shops, mala bead emporiums, jewelry shops, shops selling statues, bells, and restaurants, than possibly any other place in India. This famous statue of Lord Shiva on the Ganga is a landmark in the suburb we were staying, Ram Juhla. Every few years during monsoon, the statue has been washed away, then it gets replaced again by a new and fairly identical model. At left is the old statue, in a flood some years back: look how high the water came, I could swear the statue is laughing quietly to itself before floating off down the river – again. Monsoon was over by the time we arrived, though there was more water in the Ganga than previously on our retreats. Everything looks clean and green.  We were taken to our hotel, the Nirvana Palace, where we settled in, set up our temple room and surveyed the landscape.

Our guests from China, USA and Australia all arrived safely and then we had a lovely welcome ceremony by  some Vedic priests from the local Shiva Chandreshwar Maha Dev temple. In this photo the Guru to the family that owns the hotel joined us for the Vedic ceremony.

Parvati and I visited the Chandreshwar temple a few days later to check it out. We were both on the back of motorbikes driven by our hosts, weaving in and out of Indian traffic and zipping down back streets. I would have to say Parvati was much more comfortable with all that than I was. However our drivers were careful and skilled, and we returned safely to the hotel later on. The Chandeshwara is a powerful temple where the lingam came out of the ground by itself millennia ago, and so they built a temple around it.  Many local people go there every day and it is associated with prosperity. I love visiting places where the spiritual energy has been so coalesced and is filled with bliss. We brought the blessing of bliss back with us to the rest of the retreat, where we were contemplating the nature of love, and the river of love that is the Divine, the Ganga, and the core of our own beings. We had a sweet, gentle yet profound opening to love.

There was a lot of bonding between participants, some of whom had just met for the first time. With plenty of love present,  language did not seem to be a barrier to people having fun and getting to know each other. We had a 9 year old boy on retreat with us, he was a champion, meditated, sang, laughed and entertained himself and us with his sweetness and playfulness. I think he enjoyed the retreat as much as any of us did.  It was a theme in the retreat to feel the interaction of light and love, to allow there to be more joy and to take the risk of opening the heart in circumstances where we feel a bit vulnerable and may usually tend to clench our hearts closed. We practiced sending love every day, something that you might like to do too.

To Join Shakti Durga on a spiritual adventure, click here to see where she is going next.