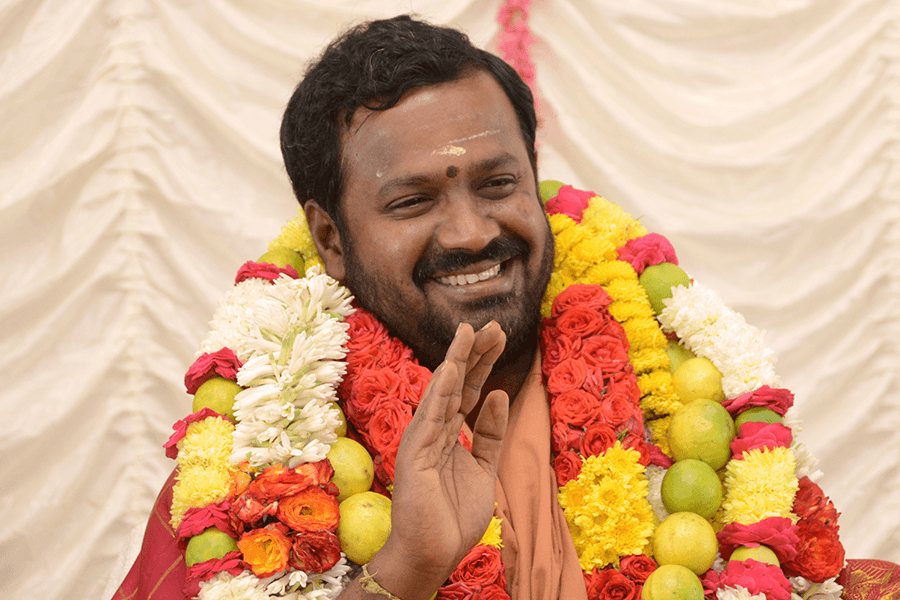 Our last place of pilgrimage in India was to visit Sri Sakthi Amma in South India.

Amma is an Avatar, an incarnation of God walking around that we can go visit. The thought still boggles my Western mind, and sometimes I think it is only the experience of actually being in the presence of such a being that makes it comprehensible to any degree. There is a lot of Maya to cut through so that we can have even a basic understanding of the grace a human life is capable of.

Western interest in Eastern mysticism has mainly centered around two branches or pathways to Divine grace and self-realization: meditation and yoga. The activities of Sri Sakthi Amma and the entire organization of Amma’s ashrams and programs belong to another path, which is the path of Bhakti or devotion. Naturally these paths intersect and interweave, it is more the emphasis and expression of spiritual practice that is different. Devotion by its nature is yoga, or divine union. It will put you into spontaneous meditative states. Further, you cannot have devotion without service, and service without devotion is sterile: the activities at Peedam combine all these things.

Despite being a Divine incarnation, Amma spends nearly all day worshipping God (Narayani, the cosmic Mother) with love, and incredible reverence. While at the ashram, we experienced hours of blissful expansion just sitting in the temple while Amma performed various pujas (sacred ceremonies) involving an idol (Vigraham) of Sri Narayani. At times there is chanting, fire ceremonies, and ceremonies involving cows and elephants. It is all done with such beauty and love! Devotional pujas have been performed by Amma over 6 hours a day for 20 years.

As the puja ceremony progresses, there are various crescendos of energy. The pure devotion and absorption of Amma into the Divine during this series of daily ceremonies lifts everyone in attendance and creates deep bliss and happiness. The pujas are done on behalf of humanity, to awaken the spiritual being in each individual, and bring prosperity and peace to mankind.

On our second day, I was asking our friend Edo whether it would be possible to speak with Amma, concerning Shanti Mission, Bodhi Festival and various matters to do with spirituality and teaching in the West. I had no sooner formulated the question than Edo’s phone rang, and it was Amma’s assistant telling us that Amma had asked Shiva Kata Tjuta and I to come for an audience.

We spent over an hour in Amma’s company. Amma was very interested in Shanti Mission and expressed a desire to help. We received some personal spiritual guidance, and then Amma told me to come sit in front of Her. Amma extended her hand, fingers down to the Earth, focused, there was a tremendous blast of energy, Shiva KT shot out of his body and went with Amma to wherever Her consciousness expanded to, and then I was told to put my hand under Amma’s. A silver pendant with a picture of Saraswati on one side and Om on the other side had been manifested out of thin air. It dropped out of Her hand into mine. She told me it was to help with expansion into more wisdom. Om Parameshwari, Om Amma!

We were advised to start monthly fire ceremonies at the new moon, and given instruction about how to go about that so that it will be a devotional practice. Edo is going to come help when he is around, and we were told that these monthly ceremonies would support the further expansion of consciousness of those involved in our work and service.

Our three days at the Peedam Ashram of Sri Sakthi Amma were definitely too short. At the last Puja we attended, as we were receiving Holy water from Amma, we were asked: “when is Durga returning to Peedam?” It felt like Parameshwari was asking me to get back there as soon as possible. So not being one to ignore clear guidance, I will be going back in April straight after Bodhi Festival.

My experience with Sri Sakthi Amma was that Parameshwari has manifested Herself a human incarnation, and I look forward with great anticipation and joy to what will come of our connection.