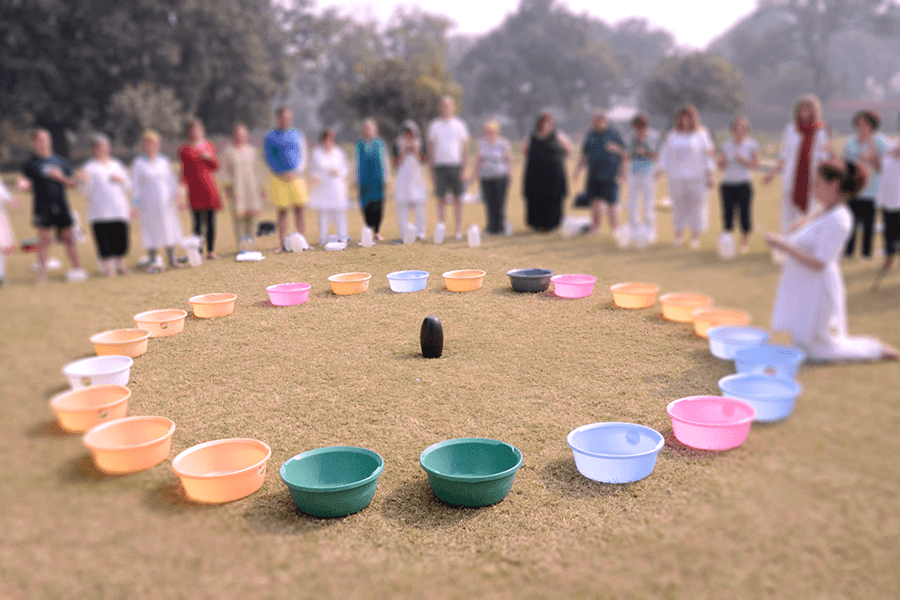 Namaste, after some intensive purification, and two days of fasting and silence, the 14th of January dawned. This was the date set for the first official bath of the Kumbh Mela.

The Maha Kumbh Mela is a celebration held every 12 years where tens of millions of people come to bathe in the Ganges River including many of the leading gurus, teachers, yogis, ascetics and swamis of India.

As you can probably imagine, we felt unsettled about attending such a huge gathering with no real local knowledge or understanding of the politics, practices and protocols of such an event. So, we had planned that we would gather some water and have our own Ganga ceremony in the safety of our hotel’s park like grounds.

There was quite a lot of local interest in our group, and in our celebrations. They found it particularly interesting that we were staying in the grounds of the hotel instead of joining the extra million people who were in Varanasi for the event or the 10 million people who descended on the neighboring city of Allahabad.

We ended up in the Hindustan Times, an Indian national newspaper, and our reluctance to attend the actual bathing ceremony ended up reading: ‘western women feel unsafe attending the Kumbe Mele’ … a very topical subject when the whole country is currently in an uproar over the rapes of young women, with some horrible recent cases sparking a very big push for reforms.

Not to be deterred, we had all collected 5 liters of Ganga water on our outings before the big day. On 13th and 14th during our days of fasting and silence, we were contemplating what we would like washed away in our Ganga bath.

At noon we all went out into the grounds of the hotel and made a circle.

One by one people read out their statement of intention concerning what they wanted to release during our ceremony. At the end of that, each person was assisted to tip the entire 5 litres of cold Ganga water over their head, soaking their clothing and their entire bodies. The water of the Ganga has such incredible energy, we all felt it tingling away as we merged with all of the saints, gurus and holy people who were actually at the Ganga at the time. It was quite amazing, many said it was a very powerful experience and a highlight of the trip. Perhaps you had to be there…

After a quick change of clothes we met again in the temple, and there was a blessing fest. By the end of the day there were 9 new disciples and 11 initiations of Guru diksha. New disciples included Swaha, Bhairavi, Kama Bhava, Shivani, Gaurie, Mani Padme, as well as Yvonne, Kali (formerly Josephine) and Prem Lakshmi from USA. New Guru Diksha were Sita, Gayatri (first disciple from USA to have Guru Diksha) Maya Badni, Krim Kali, Annapurna, Sat Nam, Nataraj, Manjushri, Chandra Ganga, Ganga Ma and Maya Eshwari. Never before has there been a day in Shanti Mission when so many initiations were given. I understood from Parameshwari that it was extremely auspicious to have the initiations at Varanasi and after the Kumbh ceremonial bath. Om Ganga!

Woah, what an afternoon it was. We all floated off to dinner, our first in 48 hours. It felt like a really blissful conclusion to the work of our retreat, but Savitur was very clear that this was not the end at all, just the end of the first chapter. Subsequent events proved him to be correct, as I will recount next letter.

Blessings to everyone,
Namaste Shakti Durga

← Prev: Meeting a Disciple of Babaji, The Deathless Saint City of Shiva →