The Peace Angels In Ireland 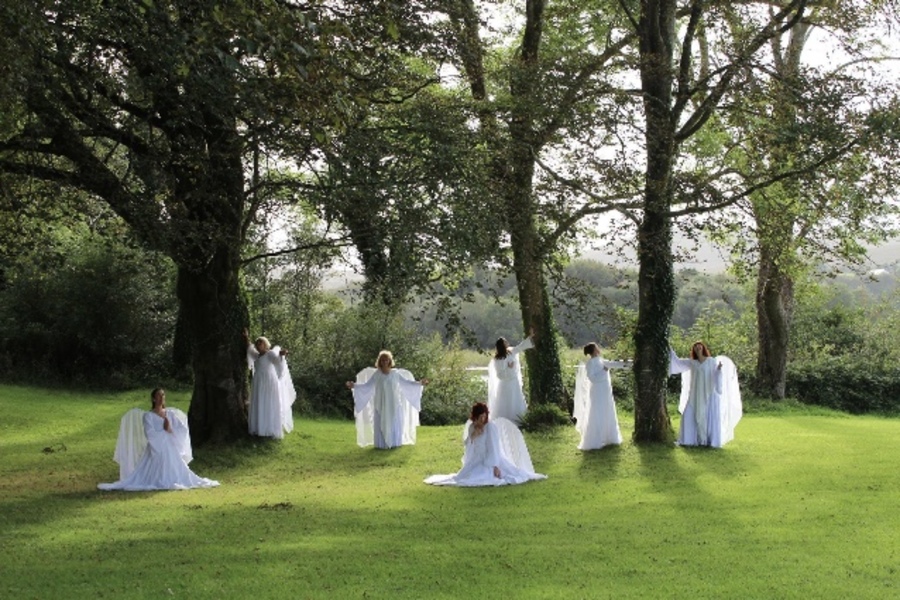 We have been here in Ireland with the Peace Angels, who have been on retreat in a castle-like country house in the West of Ireland near Galway.

On our first day we, along with the Angels visited the sacred mountain of Ireland, Croagh Patrick. It is currently named after the 5th century Saint Patrick who famously drove the serpents out of Ireland. A church and monument have been built here in his honour.

Before the advent of Christianity, Croagh Patrick was called Eagle Mountain and it had been a sacred site for thousands of years. We did a ceremony with the Peace Angels and a dozen local healers, honouring the spiritual history of the place and calling forth the Shakti to reawaken and support the expansion of consciousness that is going on in Ireland right now. Some say that ‘driving the serpents out of Ireland’ was not referring to actual snakes, but to druid priests, who were associated with Serpent power. Serpent power is a way of describing Kundalini Shakti, which looks like a serpent clairvoyantly, wrapped 3 and a half times around at the base of our spines. The Druids served the Divine Mother, in whom spiritual potency and all of creation resides.

Times change, and what may well have been done for the greatest good 1500 years ago may not now be still for the greatest good. We along with many others believe that as a new and more enlightened consciousness is flowering in the world, the foundation upon which it rests is the re-emerging and re-awakening Kundalini Shakti. We hope that our prayers and best wishes will add to the store of excellent work that light-workers are doing in this region to lead us all from darkness to light.

That evening we had Satsang at a Sai Baba Centre in Mayo, on the West Coast. Over 50 people gathered for a beautiful ceremony, we had blessings and the love was amazing, we found so many new friends and people who are clearly soul family.

Yesterday Parvati Sundari, Gayatri, Ganga, Hanumani and I along with Anne, a local healer, went to Hill of Tara, which is an historic sacred site, where over 140 kings of Ireland were inaugurated and ruled in the name of Tara. The druids utilized and maintained the energy of the land here. Before them, pre-Celtic people built great round earthworks, rings of standing stones and sacred wells. Few of these things remain now and most of them are buried, known about only through archaeological excavation and intuitive perception.

On our visit we were drawn to the Ancient stone of Destiny, upon which the Kings swore their oaths of Kingship. Parvati Sundari had carried her crystal staff all around the world to bring it on retreat, and we used it to direct energy as we circumambulated the hilltop and the Destiny Stone, which stands about four feet high. The energy of the Divine Mother came roaring up through the stone, and shot like lightning into the air. The crowds of tourists literally disappeared and we were suddenly alone on the hilltop, with shimmering energy all around us. It was quite overwhelming feeling the vastness of the Divine essence in which the place is saturated.

As at Croagh Patrick there was a sense of the energy being in the process of re-awakening. Many spiritual teachers, lightworkers and healers are working to re-ignite the spirit of the land, thought to have been turned down during the Age of Pisces when the prevailing theologies of the world believed in a split between matter which was seen as evil, and spirit (the father) which was seen as transcendent and pure. The re-integration of our consciousness, knowing spirit and matter to be co-existent with each other is something that is happening all over the world. People are realizing that the Earth is a living, sentient entity, filled with life force and a vast consciousness just waiting for us to re-discover Her. When we open to the Divine Feminine the Ancient mysteries pour into us. Real wisdom can never be killed, it just goes underground (literally) and stays hidden until such time as it re-surfaces, called back into our world by people of good heart and pure intention.

Meanwhile Peace Angels had headed further North, to the Derry bridge, between Northern Ireland (Under English control) and Southern Ireland (A republic, where we have been staying). They performed the peace prayer on this famous bridge, and the local people were very enthusiastic and welcoming. Many peace establishments and groups are working hard to bring a lasting peace to Northern Ireland.

This morning (Sunday for us, Monday for you) we held Satsang at the Sophia Peace Centre in Dublin. More than a dozen Irish people took first initiation, and Hanumani our intrepid photographer and archivist for Shanti Mission had senior disciple initiation. As soon as it was done, she jumped up and started to take more photos, before we all insisted she sit back down and Kubera Devi took her photograph for a change! Gayatri then sang her new song Real Freedom which will soon be released on her forthcoming CD, Happy for No Reason.

The sun is shining and it feels incredibly peaceful and beautiful here in suburban Dublin where we are staying. It is a shame that we have to leave in the morning, but another adventure is waiting for us in England, and we all look forward to that with great anticipation.