The Radiance Of Sri Sakthi Amma 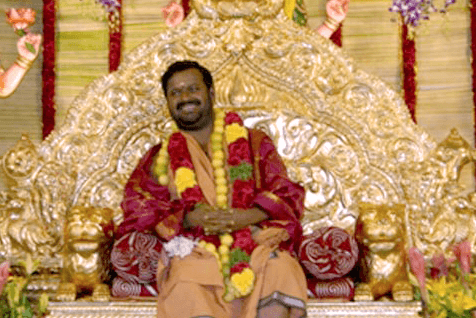 Namaste everyone, greetings from Thirumalakodi, where we are basking in the radiance of Sri Sakthi Amma. Our program has been very full and everyone is well.

When we were last here, we ran our morning program in a marquee erected on the roof of our accommodation building. Since our last visit in October, Amma has arranged for a permanent structure to be erected, which is really great and we have been very comfortable in our roof top temple, which looks over the trees and surrounding mountains. The weather has been beautiful, cool in the mornings and evenings and warm during the middle of the day. It is no doubt more pleasant than Sydney in February!  After our morning chanting and meditation most days we have had a healing clinic, which is popular not only with our own group but with others in the ashram.

We had the pleasure to meet a long term devotee of Amma, a psychiatrist from Canada called Dr Rickhi. On Thursday morning he came and addressed our group. He told us some fascinating stories about his adventures over the years with Amma. He answered a lot of questions and was very entertaining, humble, inspiring and clear in his profound devotion to Amma. Dr Rickhi serves on the board of a consortium of 57 of the top medical research universities of USA and Canada including Harvard and Yale and so on. His expertise is in integrative medicine. He was employed by the World Health Organisation, who commissioned him to study a number of healing modalities including Traditional Chinese Medicine and Ayurveda.

We have been talking to Dr Richki about our Hope project and Ignite Your Spirit therapy and how we see it as being something very helpful to both medical staff and their patients. He and several other doctors, health administrators and senior nurses from Amma’s hospital have been given IYS therapy and the result is that he gave us some advice about how to do a gold standard scientific study, which can then be presented at conferences to help medical people understand and access IYS therapy! One of the doctors we treated had anxiety related to his very demanding work in the emergency department. During his healing his chakras opened and he started laughing and couldn’t stop. He was so happy and went from being skeptical to helping us introduce the therapy to others.

I think that it is a tribute to all the work of our Shanti Health vision group and the effort that all of our healers have made, holding a vision of our work moving to a wider group of people. Meeting Dr Rickhi and the others while we are here on retreat is an example of how devotion and the immense potency of Guru opens doors to possibilities and empowers us in situations with ease and grace.
In other news, Shiva and I had the amazing experience of spending three hours at Amma’s home having lunch with Her and discussing the progress of our group, Shanti Mission and various other things. She was so gracious and loving, and is genuinely interested in what we are doing. While we were there, eagles started to fly around above Amma’s house. Amma had been given a 400 year old sacred relic which had been filled with the mantra for Garuda (the eagle that Vishnu rides) by a devoted group of priests. The last of this line of priests recently gave the device to Amma. She had it outside in the garden, and whenever She takes it out and places it on a mirror pointing up at the sky, eagles appear! Then when she puts it away, they go. This object was very hot to touch and full of amazing energy. She said that it was powered by Mantra and I really felt in that short exchange just how powerful Mantra really is as an energetic prescription to bring change to our lives.

Amma is keen for us to further develop our knowledge and practice of various sacred mantras. To that purpose she asked me to select a small group of people for intensive training in mantra with one of the senior priests. So, every morning after breakfast Maitreya, Bhadrakali, Arjuna, Mata Kali, Kyrie Shakti, Laxmi Ananda and Bhagarathi are having hours of instruction and practice in this sacred art and will train others when we return home.

Last night we went to the large ghosala, which is a temple containing around 400 cows. There is a large altar and fans to help keep the cows comfortable when they are not outside roaming around. There is a program here by which devotees can purchase a cow and calf, which is then given to a financially disadvantaged family to provide them with milk to feed themselves. Three cows had been purchased by our group, and so while we were at the ghosala cow puja was done on them to bless them before they depart to live with their new families.

Maitreya and Gayatri have delighted Amma and the devotees here with their music. Amma gave permission for Gayatri to record her vocals for her new cd in Amma’s music studio, which is a huge blessing.  Amma’s blessing will infuse the recordings and be available for people all over the world who listen to the songs. Om Namo Narayani!  Also, Maitreya was struggling a little yesterday, so he was asking Amma to help him and that evening during Puja Amma called Maitreya out of the crowd and gave him the blessed lime from the head of Narayani which was infused with tremendous grace, to help nourish and support him.

Stellar Maya is very excited because Divine café, which is where we usually have morning tea, now serves hot chips. Amma must have read ‘hot chips’ in our aura, because not only are they available at Divine Café but we had them for lunch…with Amma!
Like any mother, Amma is concerned that we are eating and sleeping properly and that we are all comfortable.

Dr Rickhi told us that when Amma was younger she used to ride a motor bike.  One day she was giving someone a lift to Vellore and her passenger was very hungry. So while continuing to hoon along the road, Amma manifested a banana and handed it over her shoulder to her passenger. Then a bunch of grapes. Then other food.

Another day, when devotees had been working hard in 45 degree heat, they all wanted ice creams. When they looked in the freezer it was all but empty. They told Amma that she could not have an ice-cream because they were out of stock. She told them to look again, and in this tiny village in the middle of no-where, as it then was, the freezer was chocker block full of ice cream…and plenty for everyone!

Amma asked our group to come up with questions and said that she would answer them, that she would give us a discourse one evening before we leave. However many people have already had their questions clearly answered as the telepathic communion with Her is amazing.

Sometimes the enormity of being in the presence of an Avatar, a living expression of God, is overwhelming. Stories and anecdotes that attest to her love, feeding someone, stories about every day things like manifesting food gives us a coat hanger, something to hang on to that in a practical grounded way shows her divinity as well as her love.

I hope you are getting it wherever you are, we are certainly sending you loads of love and blessings.